Convoi Electrical & Automation, the first year in the Convoi family.

The youngest Convoi offspring, Electrical & Automation, managed to stand on its own two feet surprisingly quickly after this business unit was taken over from Imtech. Convoi E & A also already fraternally works together with Convoi Relocations.
Author: Roy Bovens

Imtech Industrial Services Zuidoost was taken over by Convoi after Imtech’s bankruptcy on September 8th, 2015, and this gave birth to a new business division: Convoi Electrical & Automation. In its first year E & A’s focus was primarily on starting up all activities again. The period of bankruptcy and the starting up of the new organisation brought a fair amount of challenges along, such as:

A second point of focus was the synergy with Convoi Relocations. 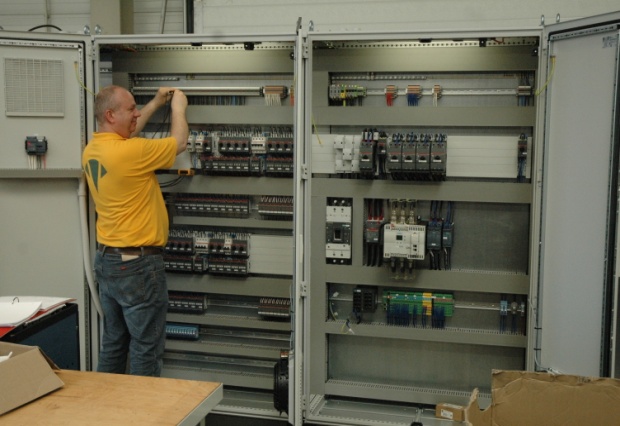 Relaunch of Convoi E & A

With the takeover by Convoi the employment of eighty staff members has been retained. More than that, now, after a year’s time, once again more than one hundred employees work at Convoi E & A. Convoi E & A managed to keep all its clients, although a part of the potential contracts was given to competitors in the first period after the bankruptcy because of a too long period of uncertainty for our clients. Apart from the assurance that Convoi gave our clients with regards to the continuity of the company, it turned out that the trust in our staff members was paramount in keeping our client base. Important is also that, in spite of the fact that the financial processing of various projects led to some losses, Convoi E & A was profitable directly from the start and that way positively contributes to Convoi’s results. Setting up the operational systems, such as Metacom and Acto, was an arduous job. It took a lot of effort, but in the end we managed to stay up and running without too much problems. In the coming period, these systems will be further improved. Swiftly, the decision was made that building panel constructions ourselves, as used to be done at Imtech, was an absolute necessity to be able to deliver an integral services package to our clients. On May 1st, 2016, Convoi E & A started its own panel construction at Maastricht Aachen Airport, for the time being at a temporary facility. On short term, we will decide how we will arrange the panel construction definitely. Convoi E & A has succeeded in not only retaining its existing client base, but also in acquiring new clients, such as Sappi Lanaken and Saint Gobain in Herzogenrath. The co-operation with Convoi Relocations has opened new markets as well. It did not only bring us new clients, but also opened up extra possibilities for existing clients, like Sekisui (transfer of a production line from Wales to Roermond) and Enexis (Maastricht-Wittevrouwenveld). The year 2017 will mainly revolve around the further strengthening of our organisation in the fields of knowledge and skill, especially there, where we wish to set ourselves apart from our competitors. We will also study the possibilities to expand Convoi E & A’s services to other Convoi Relocation regions (like Eindhoven & Utrecht and Slovakia).

In the first year it turned out not only that Convoi E & A can be of added value for Convoi Relocations, but also that the opposite is the case as well. The expertise of Relocations has proven to be of great importance in the aforementioned – and other – projects of Convoi E & A. However, the possibilities to execute joint projects are significantly bigger. The distinctive capability lies not in the primary moving activities like the laying and connecting of cables and cable trays. It is the activities in which the main focus is on performing the activities as efficiently and cheaply possible. In this, Convoi Relocations excels, meaning Convoi E & A is only of limited additional value here. The expertise of Convoi E & A can be much better deployed during the preparatory phase. That means the exact defining and determining of the technical execution of the installation that is to be transferred (electro technical infrastructure, automation and driver installation etc.) and the putting into service and – whenever necessary – adjusting of this installation on its new location. Before offering this service to the client a good mutual understanding is required. On one hand understanding of the client’s demands, on the other hand the understanding of the abilities of Convoi Electrical & Automation. In the upcoming year, initiatives will be taken so that we can employ the synergy between Convoi Relocations and Convoi E&A even better.

Convoi E & A has succeeded in not only retaining its existing client base, but also in acquiring new clients, such as Sappi Lanaken and Saint Gobain in Herzogenrath.