HOW TO GET A 160 TONNE MEDICAL SYSTEM INTO A SMALL BUNKER?

At the health campus in Maastricht, a proton therapy centre is under construction. Proton therapy, aka proton beam therapy, is a type of radiation treatment that uses positively charged particles (i.e. protons) to treat cancer. Convoi had been contracted to place and install the heavy and state-of-the-art proton therapy system.

The South-east Netherlands Proton therapy centre – part of the Maastro Clinic – which works in consortium with the Maastricht University Medical Centre (MUMC) – is one of three centres in the Netherlands approved to offer proton beam therapy, a revolutionary technology that targets tumours with extreme precision and thereby considerably reducing residual damage to healthy tissue. The American company Mevion Medical Systems supplied the equipment for the brand-new radiation therapy centre in Maastricht, and it was Mevion that contacted Convoi very early on in the project, asking us to figure out a way to place and install the system.

‘The radiation equipment had to end up in a small bunker’, Frans Scheffers, Convoi’s specialist in the installation of medical equipment, explains. ‘Mevion manufactures relatively compact radiation equipment but, when all is said and done, the largest part, the cyclotron, which measures 6 metres in length and 2 metres in diameter, still weighs in at a staggering 48 tonne. A cyclotron is a device that can accelerate charged particles to very high speeds. These positively charged electric particles, known as protons, are then transported from the particle accelerator to the radiation apparatus via tubes. The whole system weighs 160 tonne. Mevion asked us to work out whether it was even possible to get the system into the bunker in question.’ 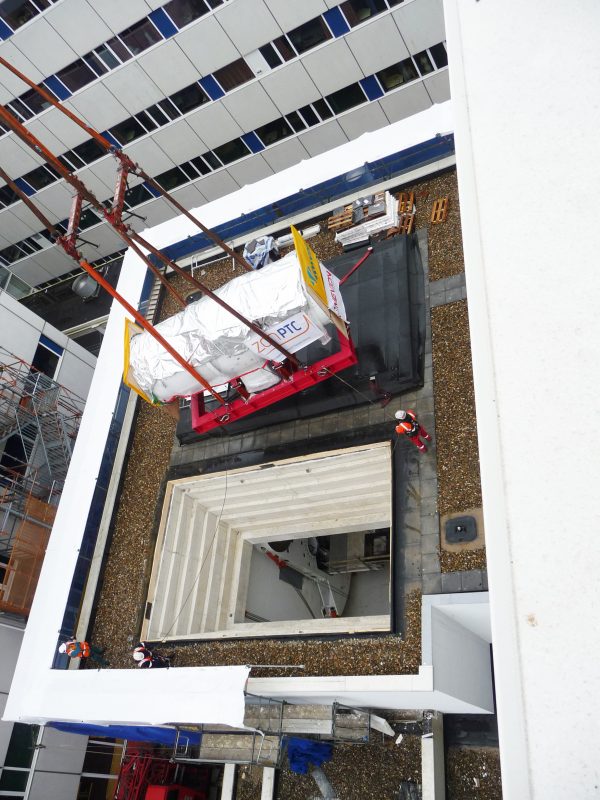 "In an operation like this it is essential to think along with the client. Coming up with an alternative lifting plan for instance meant that the hospital only had to be partially cleared on one occasion." - Frans Scheffers, Project Manager at Convoi

CALCULATING AND RECALCULATING
Based on the drawings the hospital supplied, we started calculating. ‘Quite an undertaking – but in the end we found a way to hoist the cyclotron inside, at times with only an inch to spare. In the end, we finalised the plan and Mevion awarded us the contract to place the system.’ Next, the device was shipped in 15 x 40 ft. containers from the States to the Port of Rotterdam. ‘We stored part of the consignment in our warehouse in Utrecht. The heavy part, the cyclotron, was stored closer to the site from where it was easier to organise heavy transport to Maastricht.’

1200 TONNE CRANE
The greatest challenge – getting the cyclotron into the bunker – has meanwhile been completed. The cyclotron had to be lifted across several buildings over a distance of 52 metres before it could be placed into the bunker, and by the time the lift hook had been attached the whole thing ended up weighing 48.8 tonne, resulting in the need to deploy a 1200 tonne crane with an overall mast length of 93 metres. ‘Getting permission to use the crane proved to be more challenging than expected Aside from having to obtain a special permit from the local authorities, the crane’s height and reach meant that Maastricht-Airport, EuroControl and the Environmental and Transport Inspectorate had to be liaised with as the airport’s runway was less than eight kilometres away and any potential risk of collision with air traffic needed to be eliminated the last thing we wanted to cause was an air traffic incident. Also the operator of the helideck had to be notified because the flight path of the trauma helicopter was only a mere 228 metres away from where the crane was operating’, Scheffers says.

ELECTRICAL INSTALLATION
In the end, the actual placing of the cyclotron could not have gone smoother. All in all, the phased installation of the system until acceptance by the hospital, will take eight to nine months to complete. Scheffers: ‘In an operation like this it is essential to think along with the client. Coming up with an alternative lifting plan for instance meant that the hospital only had to be partially cleared on one occasion.’ Convoi Electrical & Automation is looking after the electrical side of the project, which is implemented on a phased basis also.

NEXT ONE
In the meantime, there has been a sequel to the Mevion project. Mevion not only exports proton equipment to Europe but also to the Far East. Convoi has been asked to take part in the preliminary analysis of supplying a hospital in Singapore with one of these systems, with the option of being involved in the actual installation. 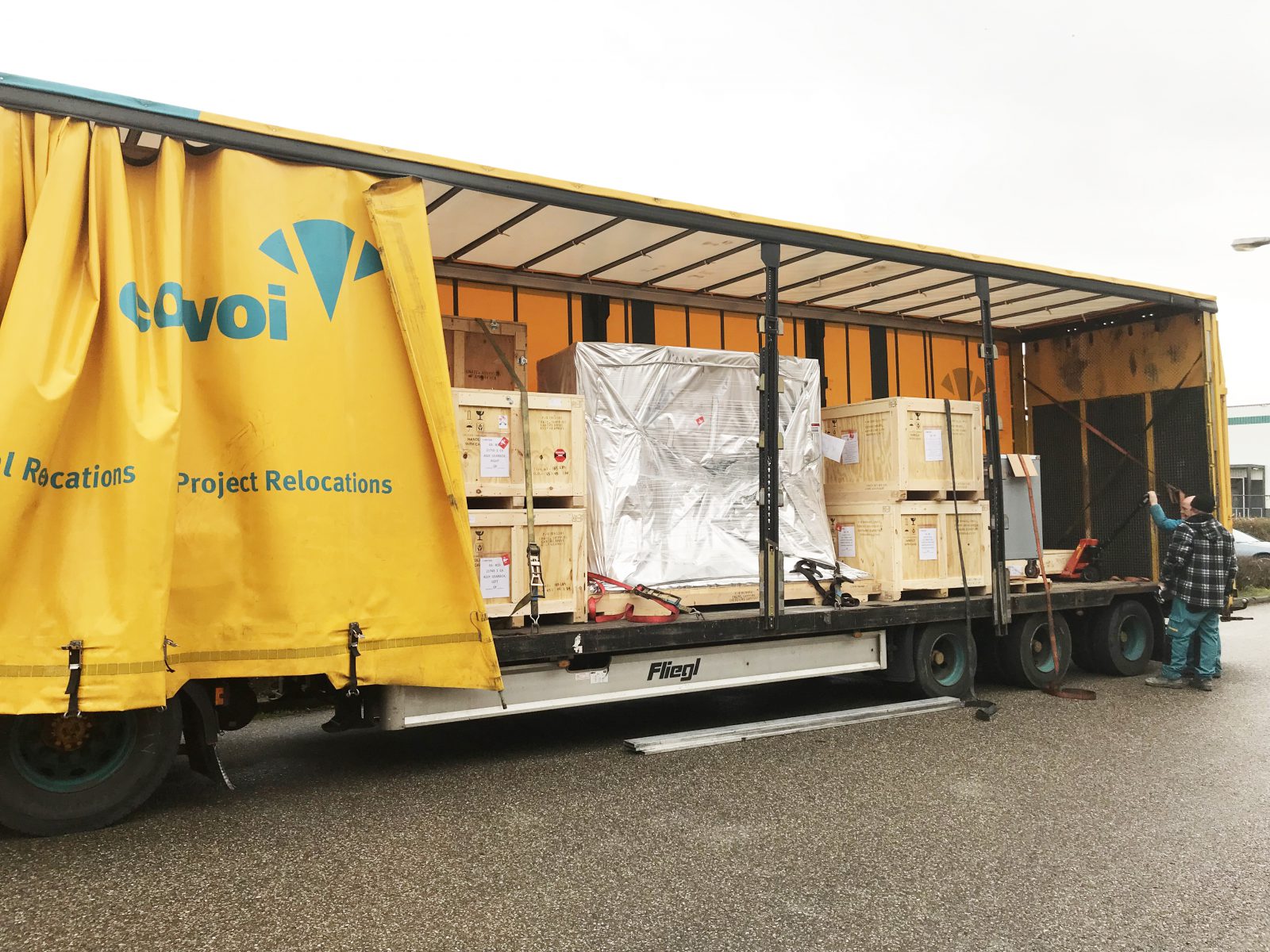 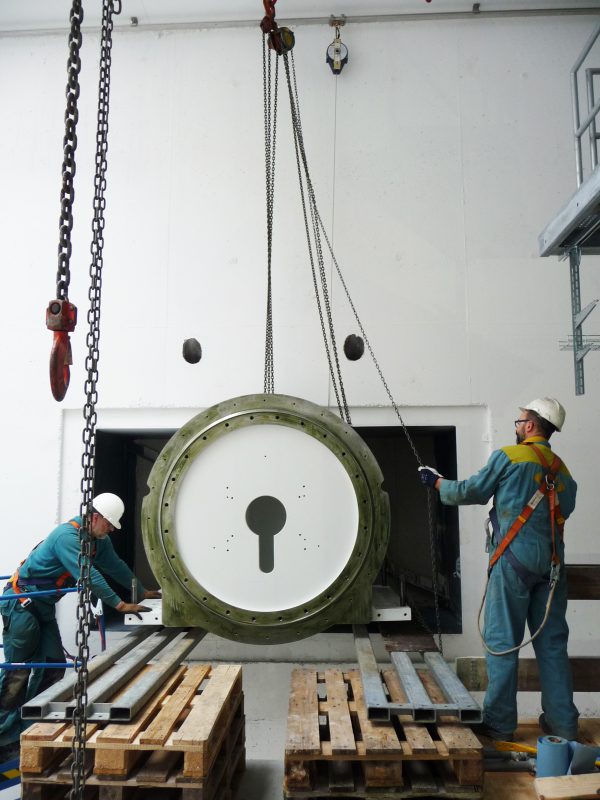 ELEKTA AND PHILIPS
Over the years, Convoi has acquired extensive expertise in the placement and installation of large-scale medico-technical equipment. On behalf of Elekta Cancer treatment, Convoi places and installs radiotherapy equipment all over Europe. ‘We have completed a number of projects in London and in Tübingen in the South of Germany’ Scheffers explains; ‘We are halfway through a project in Odense (Denmark) and recently embarked on a new assignment in Uppsala (Sweden). Assembling radiation and scanning equipment takes between eight and nine months and is executed in ten phases.’On behalf of Philips Healthcare, Convoi installs CT scanners and so-called nuclear medicine equipment. ‘For Philips, we also dismantle old scanning devices that need refurbishing before they are put on the market again. The past number of years we have been working in the Benelux, France and Scandinavia, and we are expecting quite a few enquiries from those areas over the coming years. In conclusion, we believe that we will see a strong increase in our medical sector business in the not too distant future’, Frans Scheffers concludes